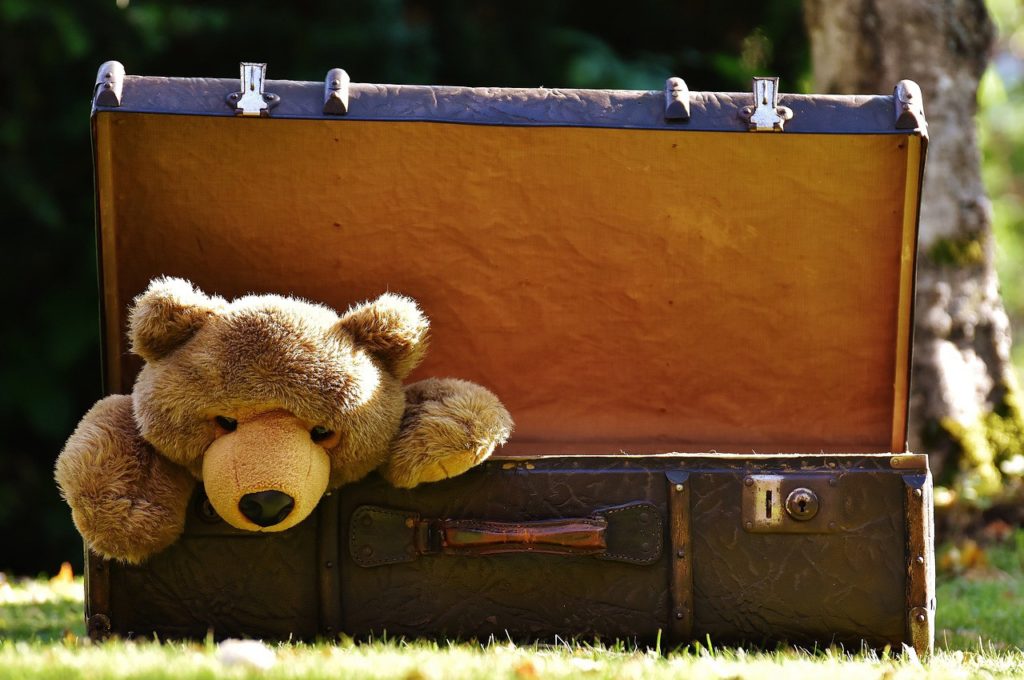 Collecting toys for play therapy can be an expensive process. You could save money by accumulating items from thrift stores, dollar stores, or creating things yourself. As you will see, most items can be found at Walmart, Target, Amazon, and party stores. Of course, you can always save time and purchase a preassembled play therapy kit like this one.

Or this one below for using sand tray.

Since I recently needed to put together a portable play therapy cart for an intern, I decided to share the way I decided to do it, and some links to hopefully help you with the process as well!

Follow these easy 3 steps to design your own portable play therapy kit!

Before you begin deciding which toys you’ll use, take into account your situation. Are you traveling to a school setting? Are you just going down the hall to use a room?

Depending on your mode of travel (walking down the hall vs. needing to drive in your car) will determine what you use to carry your items and how portable that item needs to be. For example, in my situation, I need something I can push down the hall. So, I’ll be choosing a rolling cart. If you have a job that requires travel, you will need something much more portable, such as a duffle bag.

Here’s what I’ll be using:

Rolling carts can be found on Amazon for a variety of sizes and prices. More portable options can include duffel bags (Walmart also has rolling duffel bags) and mesh bags. A great suggestion is to keep insulated lunch bags for perishable items such as crayons and paint if your bag will be stored in a car or a warm place.

For containment and organization on the cart, I found awesome storage bins at Walmart.

All of my art supplies:

For those more unfamiliar with assembling a portable play therapy kit, you may choose to use a pre-made list of essential play therapy items.

It’s important to choose purposeful items that allow the child to express a wide range of emotions, life roles, expression of self, and exploration of reality testing and limit setting. Toys should also be durable and fun!

Check out this blog on Sandtray Miniatures to get a good idea of the importance of various symbols.

Here is an example of a list you could use to set up an entire play therapy room. This list came from the Center of Play Therapy.

In Garry Landreth’s book, The Art of the Relationship, on page 125 you’ll find a shorter list of essential play therapy items. Find it on Amazon if you don’t already have it! It’s an essential resource to have!

Another great book especially if you’re interested in Sandplay is Sandplay: A Sourcebook for Play Therapists by Susan Perkins McNally. Here it is on Amazon.

To make it easier for you, here is the list I made:

Doll house (If you’re really pressed for space, here’s a folding doll house. We will be using a regular sized doll house)

Roll up road rug and cars

Acting Out and Aggressive:

Destroyable items (such as phone book or egg cartons)

Dress up items and magic wand

Here are some pictures and links for where to buy with space-saver suggestions!

Here are some pictures of items I assembled from the list above.

You can find play dough in most toy stores and dollar stores. I bought this play dough tool kit from Amazon. I also included some miniature cooking utensils.

What I love about this block set is it allows for a lot of creative building in a small space. Blocks include walls, windows, recognizable buildings, trees, and vehicles!

I’ve had a lot of kids gravitate towards the kinetic sand. I bought a bag at Walmart and put it in a small, shallow plastic tupperware bin.

Walmart usually has multicultural dolls. While these are not the same as the ones above, I use them in another play therapy room. Currently, the multicultural dolls are out of stock at Walmart. With the dolls, I also included little blankets, the medical kit, and the baby bottles.

As I mentioned earlier, you can use a small doll house like this one, or find a foldable doll house if you are tight on space.

If you have the room, I found this small jail set at my local dollar store. It has been a very popular item. I’ve had kids use this to rule out the “good” guys from the “bad guys”, act out situations and experiences, and sometimes play themes of justice and mastery. You could also save money and easy make one with a wooden box with a hinge door and some toothpick bars!

Roll Up Road Rug and Cars:

Confession: I used this rug as a kid! My grandmother was recently going to donate it, but I snagged it for use in the play room! I roll it out for smaller clients, or I roll it up when I’ve got teens. Here is a similar one. It’s a great space-saver!

I’ve had kids practice rule-following or patience (at a pretend red light) or break the rules and race or the occasional dragon-takes-over-the-town scenario! You never know!

Include easy to find dress up items such as hats, scarves, badges, capes, and sunglasses. I also included fake jewelry and fake money. For the sake of space, this is also where I stored puppets such as sharks, dolls, a turtle, and a dinosaur. Again, if you’re short on space, try some finger puppets.

I’ve also included binoculars (look at things close-up or far away), two phones, and a fake knife and gun for imaginary play. (Some people choose to not include weapons in their kits).

Here’s an awesome tool kit I found that kids love to use. It’s great for exploratory and mastery play.

I use these 3 games the most. I numbered my Jenga from 1–45 and used lists with questions for each numbered block. The blank blocks serve as open-ended questions. I use a list for building rapport, self esteem, and for teens. The Ungame also has expansion packs for working with teens. Life Stories is a great game to get to know your client! If I had to choose just one game to include, I would pick Jenga for its versatility. If you’re pressed for space, check out this mini Jenga game!

Whoever uses the cart will be able to take relevant toys from the cart and quickly display them in the empty room. Art and games on top, mastery and nurturing toys in the middle, aggressive and imaginary toys at the bottom.

I hope you enjoyed, and happy hunting!

Getting Started in Play Therapy Literature